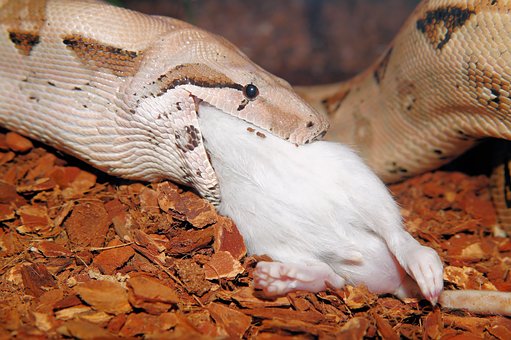 When it comes to feeding your snake, you need to stick to pre-killed food.

There are a lot of reasons that people prefer to present their snakes live food. One of the most common is they believe that a snake in its natural habitat would eat live food in order captivity they need to be given live food as well. However, it only took one incident for me to change my mind.

I had been feeding my Brazilian rainbow boa like I usually did. I removed the driftwood from her cage but left the plants indoors because she preferred to hide in them before she attacked. I put a medium sized rat in the cage as usual. As usual, she attacked quickly. However, she made a fatal mistake. She managed to get herself bit, and that caused her to puncture her lung. She died a few minutes later.

The main reason you need to stick to pre-killed food is for security reasons. Yes, 99% of the time your snake will look after the live food quickly and efficiently. But it only takes one incident to kill your snake. Feeding your snake live food is an unnecessary risk.

There are other benefits to giving your snake pre-killed food. It is more readily available in Palm Beach Rat Removal. The pre-killed animals are killed humanely and didn’t suffer. That’s unlikely to be the case when placing live prey in with your snake.

The process of feeding your snake pre-killed food is really rather simple:

1) Thaw out your rodent in warm water for 30 minutes. Snakes won’t eat it if it’s frozen, so make sure it’s warm.

3) Put the rodent in the cage.

4) If the snake appears uninterested, grab a pair of tongs and move the rodent around to make it look alive.

Snakes make good pets and can be companions for ages. Why risk unnecessary injury or even death by feeding your snake live prey?